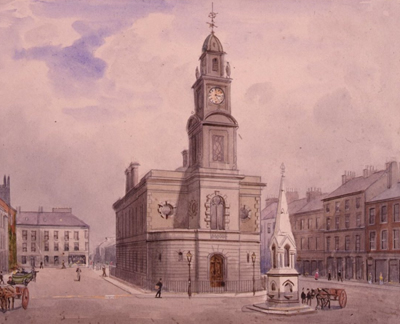 Dr Joseph McGlade commenced General Practice in Coleraine in approximately 1927, his premises where in the Diamond over a shop located where the present Northern Bank now stands. In 1929 he moved to 17 New Row. In 1948 he was joined by his brother-in-law Dr Brendan Boyle. In 1952 Dr Joseph McGlade died and Dr Boyle continued the Practice until in 1960 he was joined by Dr John McGlade. In 1970 all 5 Practices in Coleraine moved into the purpose built Coleraine Health Centre at Castlerock Road. In 1978 Dr Boyle and Dr McGlade were appointed as General Practice Trainers and the Practice became a Training Practice for future General Practitioners. In 1978 Dr Hazel Stewart was the first Trainee the Practice had. In 1982 Dr Boyle and Dr McGlade were joined by Dr Quiery. In 1987 on Dr Boyle’s retirement Dr Hazel Stewart joined Dr McGlade and Dr Quiery. Dr Boyle died in 1993. In 1994 Dr Tracey joined the Practice. In August 2003 the Practice moved to Killowen Medical Centre.

Dr Aileen Convery has joined the Practice from 1 July 2010. You may remember Dr Convery as our Trainee from a few years ago. Dr Convery is originally from Cookstown and studied Medicine at Edinburgh University, she has a special interest in women’s health.

Dr Aidan Quiery has recently retired after 32 years devoted service to his patients and the Practice. He joined the Practice with Dr Brendan Boyle and Dr John McGlade in 1982. Early in his career in the Practice it became apparent that his easy manner, caring attitude, medical skills and unfailing good humour made him a very popular family Doctor with the patients and indeed, the entire Practice team. We are all sorry to loose him.

For many years Dr Quiery has also worked in an Out Patient department at Coleraine and later Causeway Hospital and he intends continuing in post there. He has also promised us that he will assist as a ‘locum Doctor’ in the Practice when we need him.

We all, in the Practice, wish Dr Quiery a long and happy retirement while he enjoys helping raise his 3 young boys.

In earlier life he was a very good golfer and he will now have time to get back to form and preparing 3 young golf champions!

Dr Helen McMillan joined the Practice on 1 April 2014; Dr McMillan was a Trainee with the Practice a few years ago. Dr McMillan studied Medicine at Glasgow University, she has a special interest in women’s health and family planning.